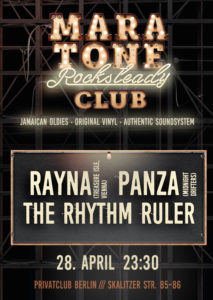 The last time we did string up the Maratone Soundsystem at Privatclub for Lone Ranger and Tonto Addi the vibe was more like a 70’s & 80’s Rub A Dub / Early Digital party. But as usual at the Rocksteady Club we go a bit further down memory lane, until the sweet 60’s. Once again it’s all about the finest Ska, Rock Steady and Early Reggae, played from precious original vinyl. This time finally Panza will be with us again as he his activities with Supersonic Sound didn’t allow him to join us for the last sessions. And once again we bring in an international guest:Vienna was called and Rayna from Treasure Isle Sound answered. He is one of the busiest DJs and Promoters when it comes to jamaican oldies events in Vienna. Rayna started collecting records since the age of 16 and did promote lots of events with great artists like Alton Ellis and Dennis Alcapone. Let’s hope he will also bring a few of the famous Treasure Isle dubplate specials with him beside his favourite tunes from his record collection. And now: „Wake the town and tell the people about this musical pleasure coming your way“