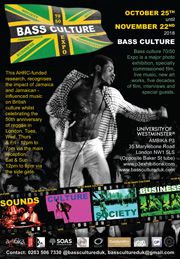 You probably know many of the photographs of jamaican artists and soundsystem culture shot by Adrian Boot for Urban image. He has been working for the last year with the production team at Standard 8 and Mykaell Riley director of the Bass Culture Music Unit at the University of Westminster to try and make this, how he calls it ‘slightly over ambitious exhibition project’ happen. If you plan travelling to London within the next weeks or you live there, you shouldn’t miss what looks like a very interesting exhibition.

One of the most active contemporary bands influenced by jamaican music will be back on the stage of SO36.

The band’s musical style is distinct from their contempories; a mix of early Jamaican music with classic 50’s and 60s American styles. There are influences from 50s and 60s Rock’n’Roll, Rythmn and Blues, Jazz and Latin music. Singer Vic Ruggiero has coined the term ‘Jamaican Rock’nRoll.’ to describe it. He says, “The band might play a classic Jamaican style but the vocals are distinctly American east coast, revealing the obvious connection of Jamaican music to the Doo-Wop of Harlem and the Bronx.” Source: http://www.theslackers.com

The HKW is known for spicing up their program with some jamaican artists from time to time. For the current project 100 years of Copyright they will bring Dennis Alcapone and Mad Professor, sounds like an interesting combination to us. The day before Sister Nancy will be there too, if you missed her great show at Badehaus earlier this year you have another chance on the 19th.

2,5 years ago Jeremy aka. Scratch Famous was our guest for the Rock Steady Ballroom and played some great original tunes from the 60s. He’ll bring a slightly different bag with more 80s Reggae and Rub-a-dub for the Vintage Night and we’re sure it will be a great dance. Panza and Barney Millah will join him on the decks.

Find out more or adjust your settings.